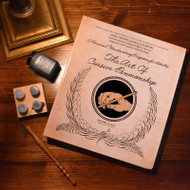 Michael R. Sull is a certified IAMPETH Master Penman who has dedicated most of his life to teaching the technique and history of American penmanship around the world. Sull has taught handwriting, calligraphy, and engrossing in thirteen countries and forty-five states over the course of his thirty-five year career. In 1979 he founded the Tidewater Calligraphy Guild in Virginia, and became a calligrapher at Hallmark Cards, Inc in 1981. After leaving Hallmark in 1986, Sull started The Lettering Design Group, a calligraphy studio specializing in lettering design and ornamental penmanship. Along with his wife Deborah Sull, Michael Sull is the author of Learning to Write Spencerian Script, a didactic book that remains most popular for learning Spencerian of all the books on our shelves. Sull also wrote American Cursive Handwriting, an incredibly thorough self-study curriculum that can be used by everyone, from primary-grade students to adults.

Sull's newest book, The Art of Cursive Penmanship, is designed to teach this artistry to adults, and its practical self-study teaching method can easily be adapted to fit anyone's schedule or skill-level. Users can improve their letterforms, legibility, and more with consistent and dedicated use of this book. By summarizing the lessons included behind its cover, we aim to show you just how invaluable a resource The Art of Cursive Penmanship is.

First and foremost, its important to mention the construction of this book. Although it features a hardcover, inside are 253 spiral-bound pages that users are encouraged to write on, making The Art of Cursive Penmanship both an instructional program and a workbook. Flip to the first page and you'll be able to personalize your book by filling in your name.

Handwriting . . . is a fundamental skill that provides inestimable service throughout a person's lifetime, and never fails to be as singular as a fingerprint of the writer, or as unique as their own voice. - Michael R. Sull, The Art of Cursive Penmanship, introduction

This didactic manual begins with a series of handwriting samples to be used for practice along with the lesson plans. Following is a series of model sheets that detail how to properly write every letter of the alphabet, both lowercase and uppercase, as well as numbers. Each letter is given its own full page, and includes the completed letter, spaces for practicing the letter yourself, and sample letters and words. Letter variations are shown when applicable, and guidelines show users proper letter slant, height, and width. Chapter One, What is American Cursive?, introduces Austin Norman Palmer, an American penman who adapted the beautiful but challenging ornamental Spencerian script into a form of handwriting that would be easier and less physically demanding to master. This became known as "Palmer Penmanship," and established the long history of cursive writing in American schooling. After outlining this history, Sull moves on to Chapter Two: The Purpose of this Book. Here the author explains why handwriting is is a valuable life skill, an absolutely human action, and a more convenient way of recording information than any computer, tablet, phone, or other electronic could be.

Why do we treasure the handwritten notes by friends and family members, or of politicians, celebrities, scientists, and everybody who was anybody long ago? It is because those notes, letters, and journals were personal, written by someone's hand of flesh and bone as their brain told them what to think and write. - Michael R. Sull, The Art of Cursive Penmanship, page 82

Chapter Two continues by explaining how traditional American Cursive was designed make sense with our bodies and our language, then covers some basics on how students can improve their signatures. These include advice on writing speed, handwriting instruments, adding personal touches, color, and more.

Chapter Three, The Heritage of American Penmanship introduces the creator of Spencerian script: Platt Rogers Spencer. A lifelong devotee of penmanship, Spencer was inspired by the curves of clouds, waves, snowdrifts, and other wonders of nature. Spencerian was the first system of handwriting to be taught in schools across America, and to this day Spencer is know as "the man who taught America how to write." 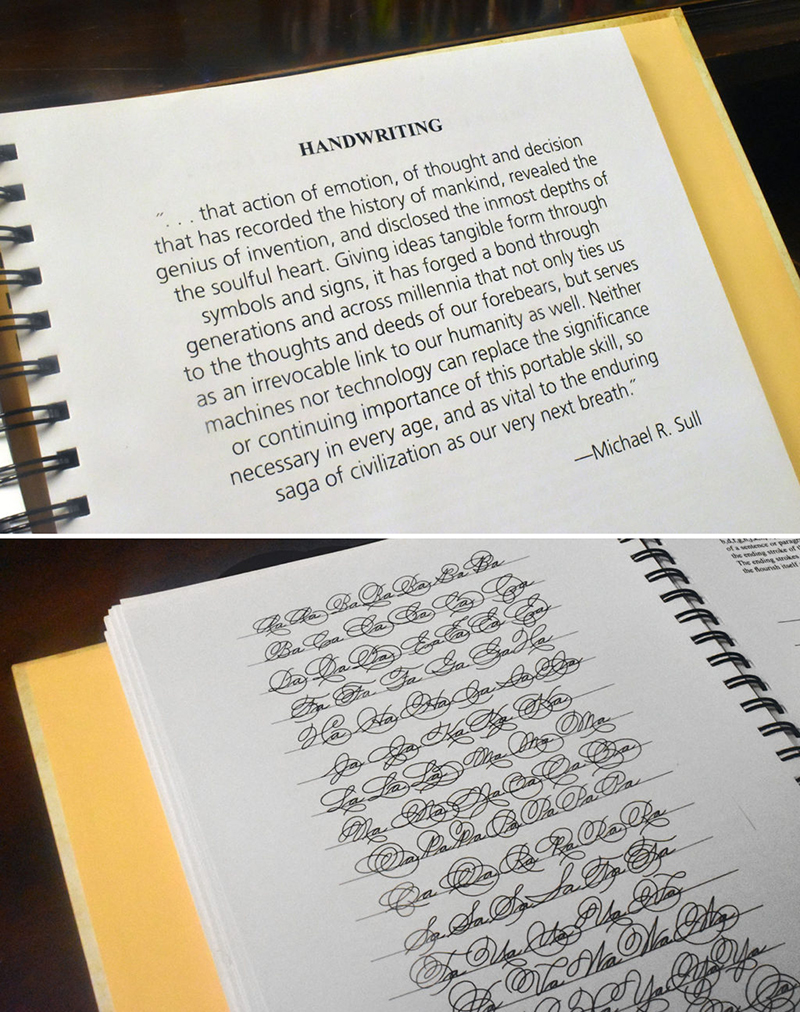 Chapter Four: How to Write American Cursive covers finger and arm movements, combination movements, paper position, posture, proper-pen holding, and a plethora of other guidelines for students to follow before they even begin writing. Easy-to-understand explanations and clear diagrams are included throughout the chapter. Rules of handwriting, such as legibility, arrangement, letter height, and speed are also explained thoroughly.

Letters are wonderful symbols. When these letters are used in various groups we call words, they can express and describe everything we see, feel, touch, eat, and think. - Michael R. Sull, The Art of Cursive Penmanship, page 102

Chapter Five covers letters, letter groups, and alternate letterforms. Included at the beginning is the full alphabet, with individual letters grouped into their respective categories. Movement exercise and cross-drill exercises are explained, which warm up muscles and promote movement consistency amongst students. Practice sheets are included for both exercises. In Chapter Six Sull examines standard, small, and advanced scales of writing, and in Chapter Seven he provides valuable advice on fitting practice time into your busy schedule. At the end of the chapter is a detailed lesson plan for students to follow each day, as well as 80+ pages of corresponding practice sheets for each lesson. Chapter Eight includes a series of quotes, poems, and selections from prose for students to copy for practice. 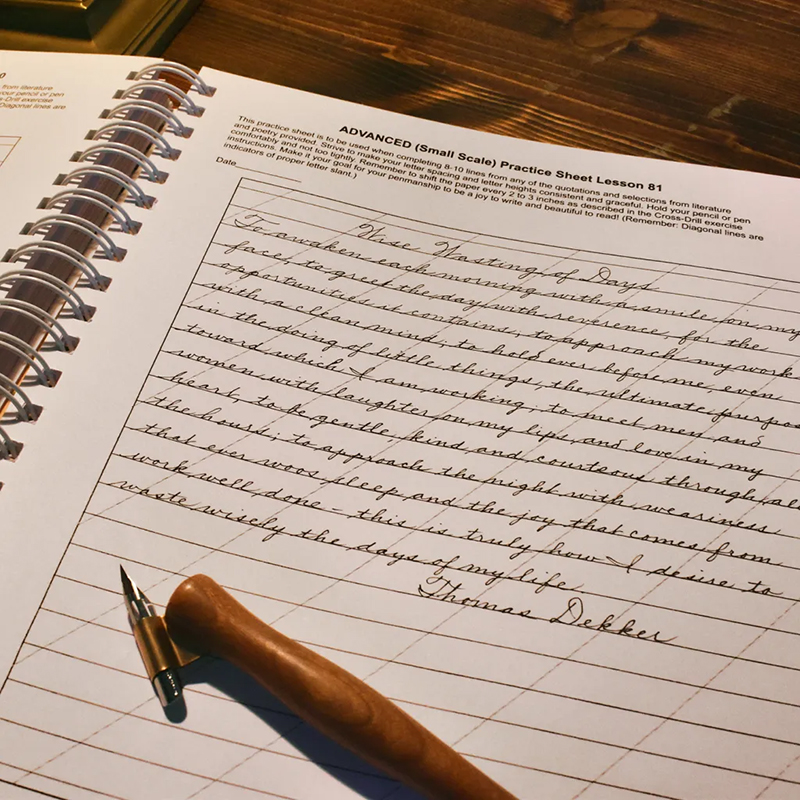 Once readers have mastered the basics of American Cursive, Sull encourages ornamentation and fun. Chapter 9, Artistic Penmanship, covers embellishing capital letters and flourishing lowercase letters, two techniques that will make your handwriting even more intimate and unique. A number of appendices are included at the end of the book, including exercise sheets, recommendations for pages to photocopy, advice for using a fountain pen, and the essentials of corresponding through a personal letter. A glossary and a list of recommended retailers to find supplies conclude Michael R. Sull's The Art of Cursive Penmanship.

This book is truly designed with the student in mind, presenting the subject matter in a clear, understandable way. Sull masterfully demonstrates the important aspects of American Cursive so anyone can learn it, regardless of age, skill-level, or amount of free-time. Start your journey to beautiful cursive handwriting with The Art of Cursive Penmanship.

Your penmanship can make distances disappear between two people, and bring the shared thoughts together as if they were whispered in each other's ear. Treasure your ability to write and write well; it is as much a part of you as your own voice. - Michael R. Sull, The Art of Cursive Penmanship, page 227

The Art of Cursive Penmanship can be purchased here.